← Setting the Record Straight. I Will Not Be Silenced.
Independent Investigator Chosen by Superintendent Provides Findings of FACT, Conclusions, and Recommendations to Board. →

The Hendry County School Board voted 3-1 on Tuesday, February 5, to approve Superintendent Puletti’s recommendation to hire Alex Del Russo of Carlton Fields to conduct an independent investigation into the presence of fingerprints, identified by the Florida Department of Law Enforcement (FDLE), on unwanted mail received at my home as belonging to the Deputy Superintendent of Human Resources, Operations and Continuous Improvement of the Hendry County School District. Dr. Sally Berg, Rev. Dwayne Brown and Amanda Nelson voted in favor of the investigation. Jon Basquin voted against it. I abstained from voting.

Approval of the independent investigation comes on the heels of notification from the State’s Attorney’s Office 20th Judicial Circuit that the agency was declining to press charges for what was cited as a lack of evidence to prove stalking beyond a reasonable doubt, according to Sheriff Whidden.

At the request of my colleagues, I presented public records from the Hendry County Sheriff’s Office pertaining to the complaint and investigation prior to the 3-1 vote.  For the sake of transparency, those documents are included below.

The estimated cost of the investigation was estimated between $6,000 – $12,000.  Board member Amanda Nelson asked for it to be capped at $12,000. All board members were in agreement. Superintendent Puletti amended his recommendation to include the cap of $12,000 with the caveat that the investigator would have to come before the Board for approval if the costs were anticipated to exceed $12,000.

The board approved investigation will look into whether the six separate unwanted mailings were created or mailed during district time or using district resources, as well as any patterns of harassment or retaliation against the Busin family, and any negligence by the superintendent in dealing with this matter after being notified by Sheriff Whidden on November 15, 2018 of the FDLE’s determination. 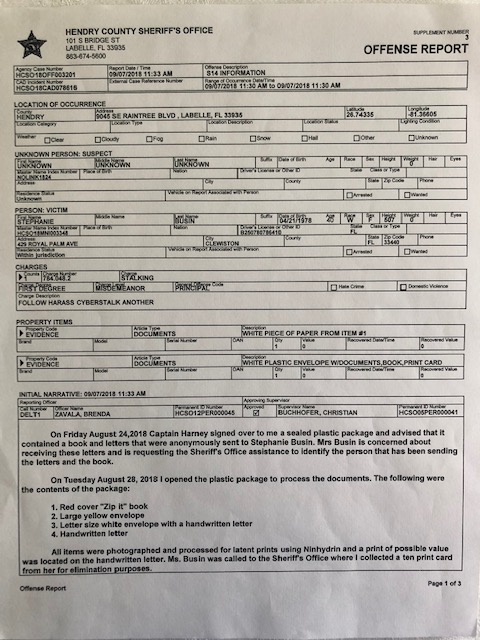 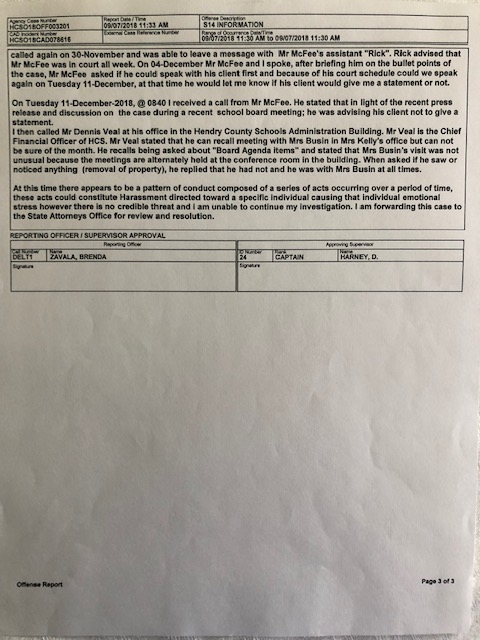 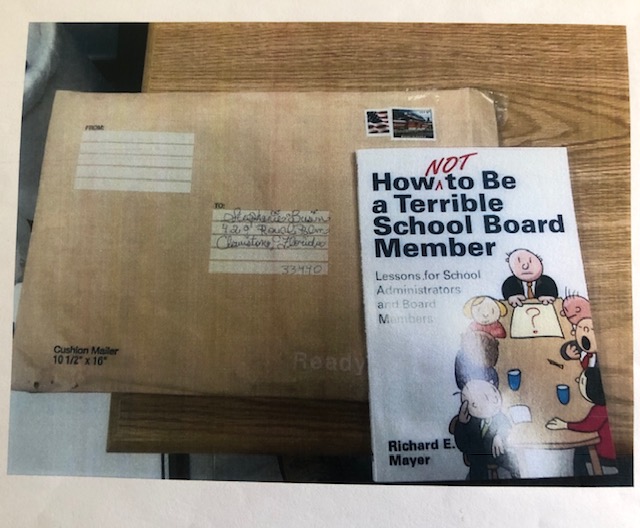 This was the second package received on July 2, 2018 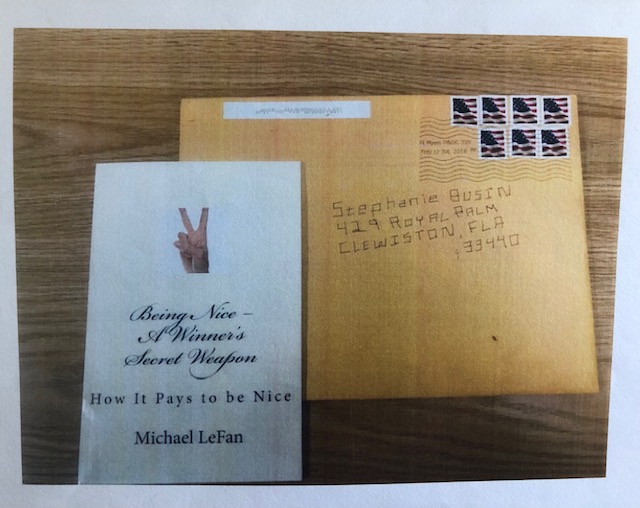 This is a picture of the letter received prior to being fingerprinted by HCSO. 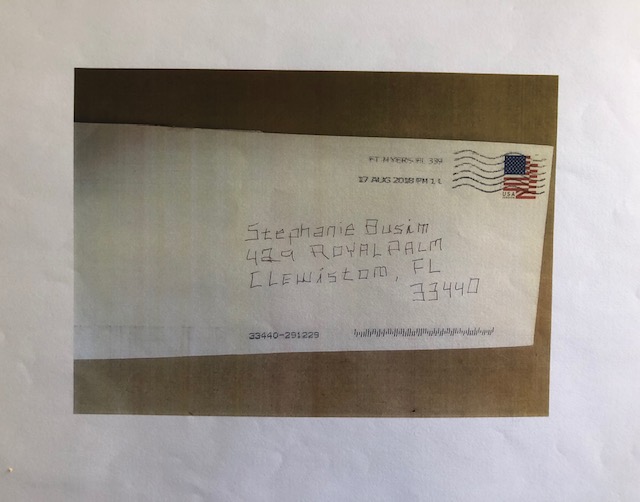 This is the envelope the letter arrived in prior to being fingerprinted by HCSO.

This book was a book that arrived at the same time as the letter. 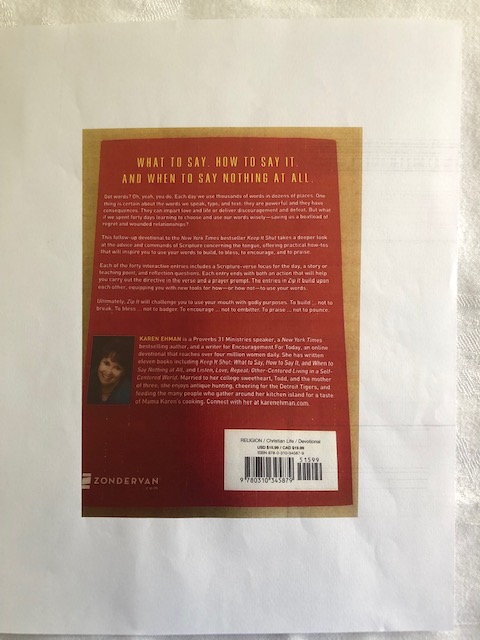 Back view of book.

This is the envelope the book titled Zip It arrived in. 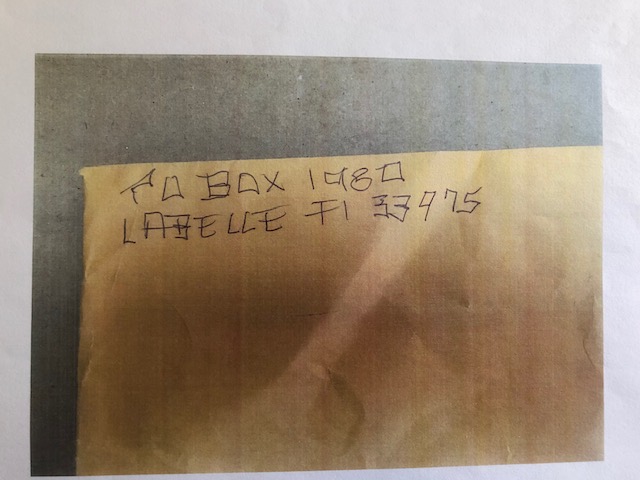 The return address on the Zip It package is that of the Hendry County School District offices in LaBelle. 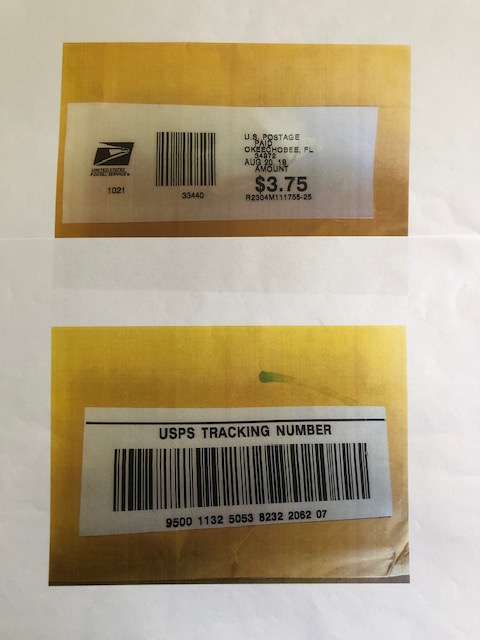 Postage and tracking number from the Zip It package. 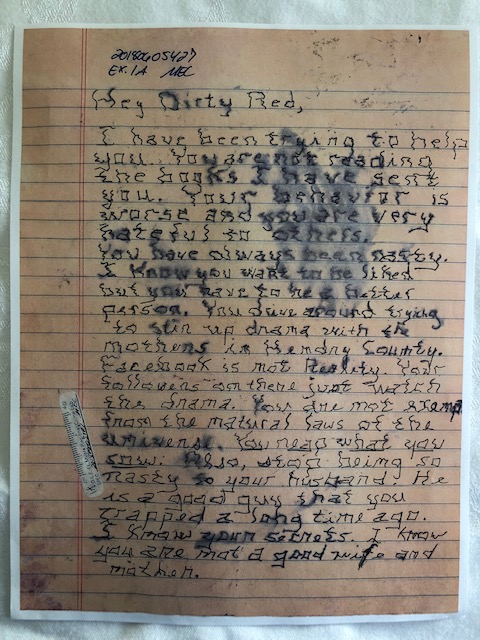 This is the letter that was sent to FDLE to be analyzed after fingerprints (located on the left bottom of page) were recovered by HCSO. 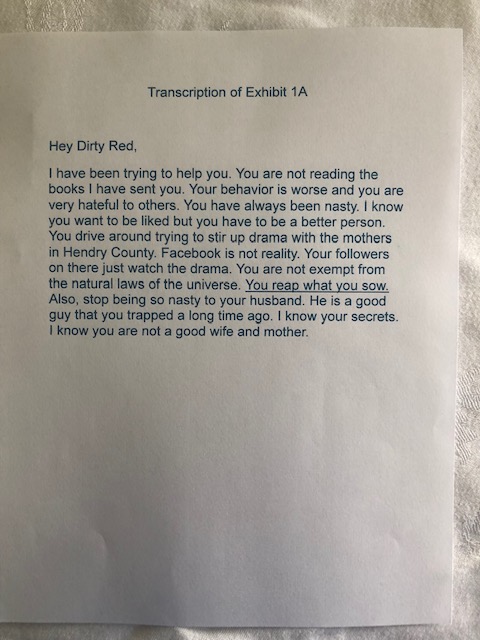 This is a transcription of the letter referred to as Exhibit 1A by FDLE. 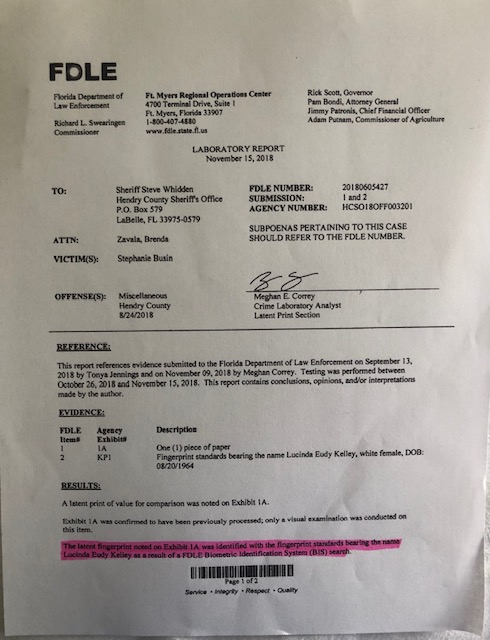 This is the laboratory report identifying the presence of fingerprints belonging to the Deputy Superintendent of Human Resources on Exhibit 1A.

I would like to encourage any members of the school community to report any and all instances of bullying or harassment at http://www.HendrySafe.org.

Posted on February 8, 2019, in Uncategorized. Bookmark the permalink. Leave a comment.

← Setting the Record Straight. I Will Not Be Silenced.
Independent Investigator Chosen by Superintendent Provides Findings of FACT, Conclusions, and Recommendations to Board. →