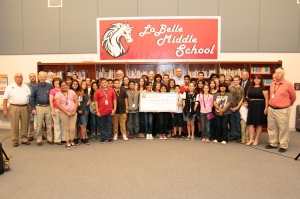 LaBelle Middle School students with the School Recognition Program check from the Florida Dept. of Education.

Governor Scott visited LaBelle Middle School on May 29 to present the Hendry County School District with a check for $132,183 with funds from the Florida Department of Education’s School Recognition Program. Westside Elementary and LaBelle Middle School earned this recognition money by improving their school grades based on standardized test performance.

My sons greeting Governor Scott when he arrived at LMS.

In the governor’s signature style, he greeted every person he met as he walked through the hallways toward the library. He visited classrooms and spoke with students and teachers. He made sure that every person who wanted their picture taken with him got the opportunity, students included. (A little side note: Clewiston native, Nathan Edwards, son of Chip and Mary Edwards, is the Governor’s staff photographer. I used his pictures in this blog. I’ll give you a link at the end of this post to see all the pictures he took during the Governor’s visit.)

While Governor Scott was here, he spoke to the press about his hopes for the senate and house to pass a budget that included “record allocations on K-12 education” during special session currently underway. The Governor also gave Superintendent Puletti, and Principals Ken Pickles and Tony Busin a chance to address the press regarding their school’s achievements. Both school administrators praised their students, teachers, and staff for the successes.

As a board member, to have the Governor visit your district and present school recognition funds to two schools is an amazing honor. I’m incredibly proud of these schools for their successful strategies, hard work, and resourcefulness that moved the student achievement needle. (I think it needs to be acknowledged that Clewiston High School has shown recognition-worthy growth and was within a few points of improving the school grade to a B.)

I don’t know if you caught the last name of one of the principals I mentioned earlier. The principal of Westside Elementary, Tony Busin, is my husband so the honor was not only professional, but personal as well. It was such an exciting moment for our family to celebrate together.

The Governor’s visit brought additional exciting news to the district with the announced appointment of John Benkert to the District 3 seat vacated by Pat Langford. I’ve had the privilege of working with John on various education-focus initiatives through the Hendry County Education Improvement Task Force in the past and look forward to working with him as a colleague on the school board. You can read his professional bio on his Facebook page: District 3 John Benkert

As promised, you can see all the pictures from the Governor’s visit here. Thank you again for reading my blog and for the privilege of serving Hendry County.

Posted on June 7, 2015, in Uncategorized. Bookmark the permalink. Leave a comment.